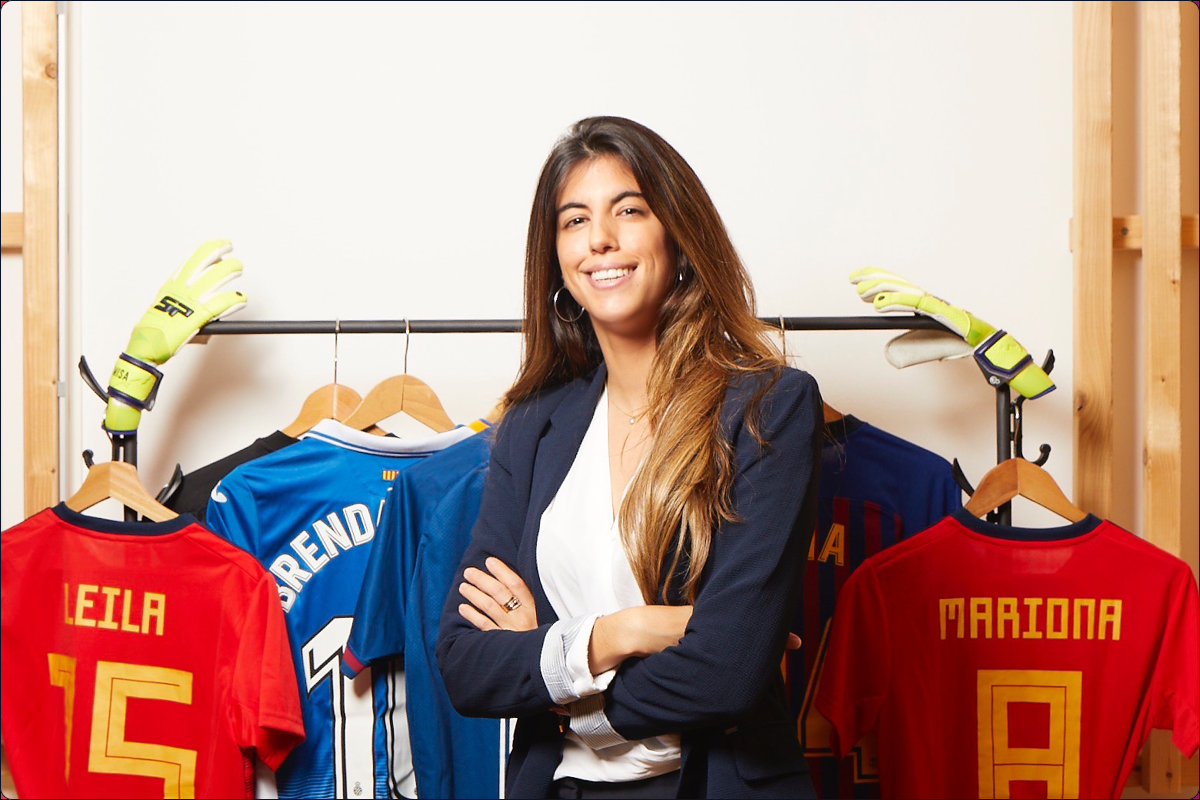 Ahead of International Women’s Day, we caught up with Carlota Planas, Co-Founder & CMO of Women’s Football agency, Unik Sports Management to talk about the challenges of launching a business during the pandemic, the importance of social media to the women’s game and what she would #ChooseToChallenge about the football industry.

Hi Carlota. Thank you so much for taking the time to speak to us. Can you begin by telling us a bit about Unik Sports Management and why you chose to start the agency?

CP:  We started the agency nine months ago. Before this, my background was in journalism – I worked for Diario AS covering Barca for nearly two seasons and I got to work with a lot of players; follow their routine, interview them, hear what their needs were. I started to see that players had intermediaries, or agents, but most didn’t have someone there to care for all the other things that aren’t to do with sports contracts and renewals. So, I asked myself, what can I do to help them?

I started out on the men’s side of the game, mainly with Brazilian players because I speak Portuguese, but after a while I thought, well, I’m doing all this in the men’s game, but what about for the women?

My partner and I felt this sort of professional service was missing in the women’s game, especially in Spain. There was no one offering a 360-degree service to women players. We always talk about how the woman’s game has to be professional; how the players have to be professional; coaches; referees. They have to be professional themselves in their attitude, but what about the agents? What about the management of all these players? Because once the players become professional and play for a big team like Barcelona or Real Madrid, there’s a lot of things that start happening – talking with the press, brands, addressing sporting needs – who takes care of all that? We decided to create Unik to give a solution to this.

On the other hand, normally agents in the women’s game have lots of players on their books because the salaries involved are very low, so they need to have that volume to feel the benefit. Right from the start, we decided that Unik was going to be a long-term project. We wanted to offer quality over quantity, so we decided to invest everything we have, and re-invest all we get, to offer the best service and be able to attract the best footballers – both current stars and young players. We had a clear strategy of saying, we’re not going to make money now, but if we want to really try to professionalize this management, to see if there’s a future here, we have to be all in. So that’s what we did.

CP:  I think social media has been key for visibility. For the last couple of years, it has been difficult to watch the games, to get to know the players and to follow the competitions through mass media. Social media gave us the platform, the strength and the space to be able to reach the fans; to say: “Hi, this is how we play, this is who we are, follow us!”. It is very important for fans to have access to all this for the game to grow, because without fans there is no game. We know there’s interest – as you said, in the World Cup in 2019 the stadiums were full, there were record TV audiences- so we only need to facilitate the access to it.

In your experience, how important are digital technologies for developing the connections between players, brands, and fans?

CP:  Consumption habits have changed, and brands are facing the most digital generation ever. Having this in mind, they have had to shift their strategies and the way they connect with their consumers towards using new platforms, and, as players are already on those platforms, that means that women footballers are becoming a form of access to these fans.

Ultimately, players use these technologies to be heard, fans use them to entertain themselves – brands are in the middle, so they can use the players to reach the fans. It’s an easy equation!

COVID has brought many parts so the industry to a standstill, but it has also accelerated both the adoption of digital technologies and the more digitally-centred habits of fans – how has this increased reliance on digital changed the approach of Team Unik and the way you approach the management of your players?

CP:  It’s been difficult for us not being able to physically go to games, not to be able to speak with players, to be with them, but technology has played a big part helping us to remain connected.

We were born in the middle of a global pandemic, so we really had to become all-digital straight away. We’ve signed nearly all our players online. Before you would go meet the player and the family and present a proposal, but now we aren’t able to do that, so we had to try to change the way we connected with them and showed them what we were able to do.

COVID has changed the way we communicate with players and the way they communicate with us. We are more connected to them now than ever before! We can reach them quicker because before they didn’t use their phones so much, they didn’t check their emails – this sounds like a small thing, but some brands would contact them via their email accounts, and they wouldn’t check them!

When we were creating the agency, we knew that we would have to connect to players differently and work differently. Everything has changed – Before COVID there were more TV ads, more face-to-face interviews, but now 90% of what we do is on Facebook, Instagram, Twitter and increasingly on TikTok.

Thinking about digital and social media, what are the biggest challenges for the players that you manage and what kind of digital opportunities are you looking to exploit for them?

CP:  The most significant one is the loss of privacy. As their fame grows, they are starting to realize that they have to start thinking and acting like a public figure. Some of the players on our roster have 150-200,000 followers – that’s more than a lot of the men playing in LaLiga!.

In terms of opportunities, well, there’s lots of opportunities – ones to bring them closer to the fans, to show them who the players are. Social media is perfect for that. Especially on the commercial side, social media has really opened up opportunities because before we only had the typical TV adverts or billboards, and now digital presents a range of new ways for them to work with brands.

What impact do you think Horizm’s platform can have on how you generate value for both your players and the brands you work with?

CP:  The main reason we were super attracted to Horizm is because the platform gives us objective data and specific social metrics to justify and illustrate the real impact and value of the digital campaigns we do. We can see what audience has seen it, what the peak was. It’s given us the data, information and weight to prove to brands that women’s football is not just a good thing to do or a social responsibility, it is a really wise business action.

Today is International Women’s Day and the theme this year is “Choose to Challenge” – What has been the biggest challenge for you in setting up a dedicated women’s football agency and what part of the industry are you hoping to challenge going forward?

CP:  I think the first challenge is stereotypes – I am young, and I am a woman in a man’s world. In a football world. Sadly, there is still a perception in some quarters that if you’re young you’re less important, less serious; and if you’re a woman you don’t know about football. So, this combination was a bit difficult at first. However, once I got to the first meeting, I managed to change those perceptions. I think it’s a positive thing coming from a not so positive reality – these stereotypes create a barrier that shouldn’t be there and we, as women, have to overcome them – but we’ve demonstrated that, once we’re given the chance, we prove our value. Lots of women are showing that they can be in leadership positions in important companies and clubs. For example, for the first time, the Vice President of La Liga is a woman. I know it’s difficult, I know there are barriers, but I think the objective of all women today is to take away those barriers for the future generations.

In terms of what I’m hoping to challenge going forward, my real mission is to see a time when a woman steps onto the field as a player, or as a coach, or as a referee, and she doesn’t become big news just because she is a woman. It should be about whether they are good at their job, not what their gender is! Likewise, I would like not to be news because I’m a female agent, but for the deals I’ve closed. I really appreciate the coverage, the visibility from all the media in Spain, but that shouldn’t be news. It should be normal. There should be thousands of female agents, in Spain, Europe, all over the world.

So that’s our mission. I think it’s more about our players being recognized globally for their talents. We want them to be seen as people that play sport, not as women who happen to play sport. They are footballers and they have to be seen as footballers. This is what we are trying to achieve.

For more information on Unik Sports Management go to https://unikteam.com/